Here are more excerpts from the reports that were published in the Columbus Citizen in 1916 by reporter C.C. Lyon describing early training at Columbus Barracks.

They divided us into platoons of 16 men each for assignment to barracks and drill sergeants.

Drill is the big word in an Army post dictionary.

The sergeants bark it at you every minute you are on the drill grounds.

And right here let me say the drill sergeants are the backbone of an Army recruiting post.

Whether the recruit will make a good soldier depends largely on the drill sergeant.

“The first thing a soldier must learn,” the drill sergeant said, “is cleanliness of body, how to appear neat and soldierly in his clothes, and how to behave himself inside and outside the post.”

We found out mighty soon what the sergeant meant by “cleanliness” – two baths a week, at least; teeth cleaned three times a day; face and hands scrubbed with hot water and soap before every meal; shoes shined at least twice a day; clothes always spotless and pressed; shaves at least twice a week, and every man is supplied with four suits of underwear and six pairs of socks to change as often as he wants to.

At the first drill, the sergeant singled out one of the boys.

“Did you wash your face this morning, young man?”

“Well, go back and try it over again and this time put a little more enthusiasm and soap into it.”

BRACES A MAN UP

After drills I would find myself walking around with my shoulders thrown back, head up, stomach drawn in, and hitting the ground on the balls of my feet.

There’s no room in the United States Army for the slouch.

There’s another thing that distinguishes the Army man, and drill and discipline does it; he snaps off his physical movements and his mind soon comes to work just as briskly.

It now takes Uncle Sam about 25 drill days to whip a recruit into shape so he can be assigned to a regiment and sent away from the Columbus Barracks.

POINTS OF A SOLDIER

In developing a recruit into a real soldier, Army officials lay stress on three things – drilling, eating and recreation.

Right after dinner every day, except Sunday, we could change from our soldier uniforms into our ‘recreation clothes,” which consisted of pants and blouse made of overall material.

They marched hundreds of us to the big drill hall.  There we found boxing gloves, medicine balls, and a lot of other gymnasium paraphernalia.

The sergeant ran us around for 15 minutes, passed the medicine ball for another quarter hour, and then showed us all sorts of indoor games and leg and arm exercises, all fun, but carefully designed to strengthen our bodies.

“Now for the boxing gloves,” he said, and a shout of approval went up from all of us.

In the Army they teach you to fight with your hands as well as with a gun.

While the mass of us were thus enjoying ourselves, noncommissioned officers had scores of other young fellows in another part of the reservation training them for the coming baseball season.

Some of the best amateur teams in the country are to be found in the Army.

Whenever a good baseball, football, or basket ball player enlist, there’s always a good deal of wirepulling among the companies to land him.  I’m told that often high Army officers take part in this good-natured wirepulling.

The Columbus Barracks has free bowling alleys and all recruits are urged to use them.  A big pool and billiard room is also provided, where they can play at half the cost outside the post.

A well-stocked library and reading room is also maintained for the men.

Some photos of training and recreation around Columbus Barracks: 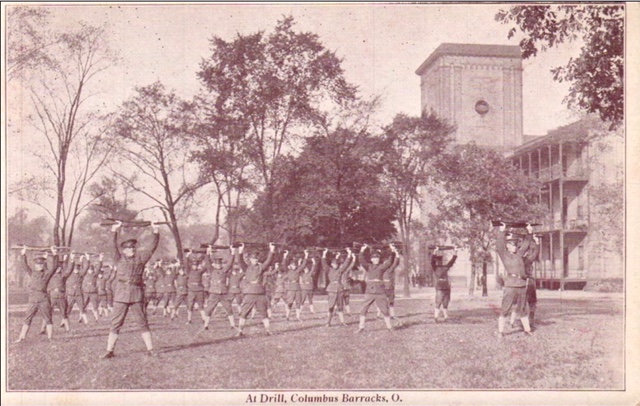 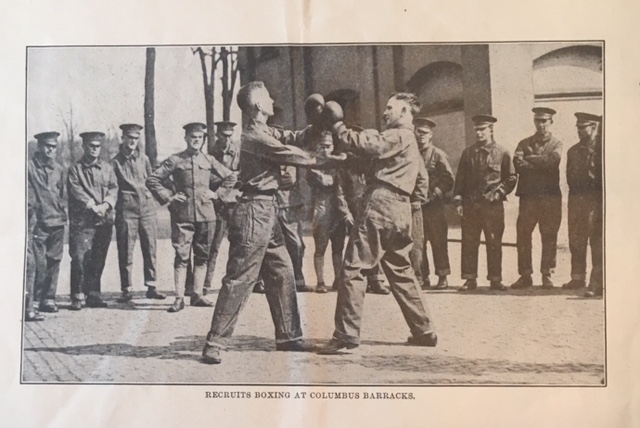