When Jay arrived at Camp Devens on April 18, he had at least two more weeks of basic training to complete.  By this date in May, 1918 he would have completed that requirement.

So, one might think his training was complete…..but oh no….not by a long shot.  Still to come was training in trench layout and construction, care and use of the rifle, marksmanship, bayonet usage, lectures on everything from personal hygiene to engineering terms.  And, yes, more marching and drilling….a lot of marching and drilling.  Jay was not a happy man. 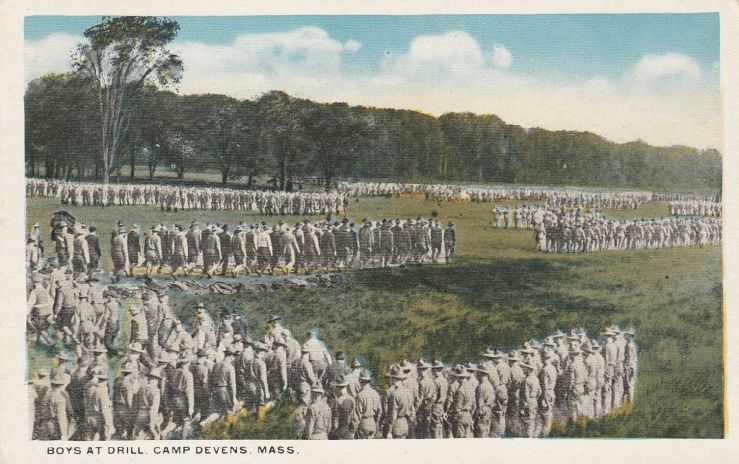 Monday through Friday, every day started out with hours of drill.  Jay often wrote of how much he hated drilling but in the Army, you just did it.  Jay had finished his basic training but he would have been required to participate in the same training as all the other recruits and draftees at Devens.

“The men coming from civil life required two items of training: first, physical exercise for the physical betterment of the man and the development of a correct military carriage, and second, close-order infantry drill, which is the mainstay in developing discipline.  Generally, the men were adaptable and readily grasped the military idea.  The change from civilians to soldiers was rather marked in the short period of six weeks.

“The men were taught military courtesy and the meaning and significance of the salute, with the school of the soldier and the school of the squad.  Short marches were made and Personal Hygiene and First Aid were taken up in lectures.  The men were taught the manual of arms and the use of the bayonet, thus accustoming them to the handling of the rifle.  It was also necessary to teach the duties of sentinels on interior guard duty.”

“For emergency, fire drills were held every now and then.  The men soon were introduced to the pick and shovel, as a certain amount of trench and road construction was carried on.  One afternoon per week was given over to compulsory athletics.”

“Each Saturday morning, inspections of the companies were held at which each man and his equipment had to be in the cleanest and neatest condition.  Soon after this introductory training, the use of engineer tools and equipment was taught and the men learned knots and lashings and their use.  After complete training in position, sighting, aiming, and trigger-squeeze exercises, preliminary target practice was held.”