One hundred years ago today, July 22, 1918, Jay wrote to Rinda while at sea aboard the troopship Katoomba.  This would have been their ninth day at sea and he sounds pretty relaxed.  As dire as it probably seemed when they left Brooklyn, the passage is going well.  He mentions working with the company mess but I’m not sure if he was cooking or assisting.

Whatever he was doing, the food was bad.  Guys were getting sick but I’m guessing that was mostly sea-sickness.  This would have been the first time Jay would have been on the ocean, sounds like he’s doing pretty well for a mid-westerner with no sealegs.

First letter I have written since sailing.  Having been somewhat busy with Co. mess.

We are having a very nice trip weather has been ideal.  Sea nice and smooth at all time.  Some members of our Co were sick for a day or so but I only lost one meal.

Outside of having a cold I am feeling fine. Weather has changed somewhat and its nearly as cold as Oct.

Our food is not the best however.  Not as good as we received in camp but if we don’t receive any worse food then we are now receiving we will get by all right.  Raining this afternoon many of the men are sitting about the deck writing.

Red Cross & Y people are sure doing a great deal for the American soldiers.  When you write me address as below.  I will number this letter no. 1.  Hoping letter reaches you in near future.

Best of wishes to you and R. 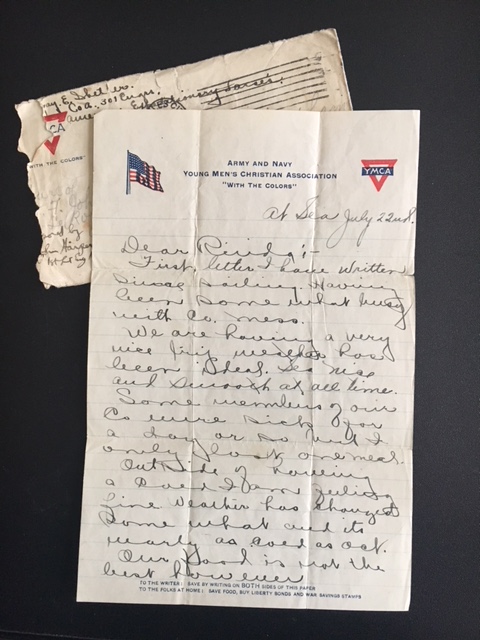