One hundred years ago today, September 21, 1918, Jay sat down and wrote to Rinda from Flirey, France.  Last week I was in the exact location where he and Unit A were and have no doubt he penned the letter near that location.

Looking back, Jay had been a traveling salesman in the Upper Midwest but North Dakota is new to him so he didn’t know much about where Rinda was.

He reminisces about the old days before the war, I’m sure every Dough Boy did a lot of that. Every single day. But he’s happy enough and staying busy. 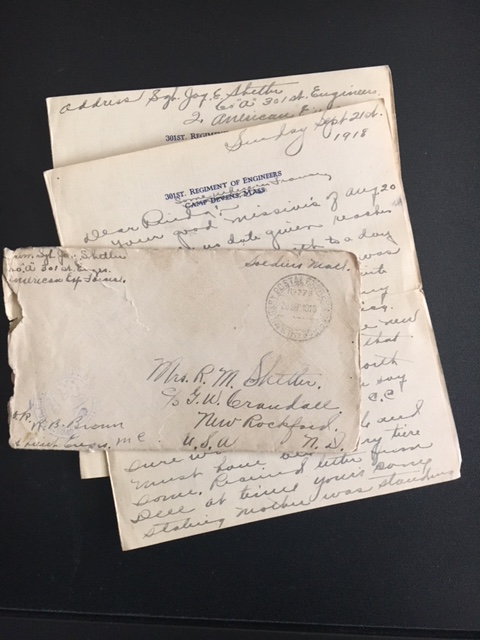 Your good missive of Aug 20th and July no date given reached me yesterday one month to a day from the time the last one was written not so bad.  Taking into consideration we are many many miles from America.

No I do not know where New Rockford is never made that town, while working North Dak territory.  Note what you say about the jump from C.C. (Charles City, IA).  Sure was a long ride and must have been very tiresome.  Received letter from Dell at time yours came stating mother was standing nervous strain much better than he expected and was in fair health for her considering her weak condition.  Sure was pleasing news I will assure you.

But in case Dell is called to the colors in the 18 to 45 draft it will be awfully hard upon our people.  But they must be brave and bear up same as thousands yes millions of other parents have already done.  I am writing by candle light remember how I used to sit up and write by the candle light not use the oil lamp back in B.D. (Blackduck MN). Ha ha little did I then think I would in a few short years be writing by the light of a candle in far distant France.  But as Sherman said “War is hell”.

Well I am getting along very well with my work and enjoy it very much.  I have served meals under some trying conditions since coming to France and in some very fancy places and hope and long for the day to repeat some of my experiences to you.  Cook’s work every other day but Mess Sergeant works every day.  But that doesn’t bother me very much as I am somewhat used Sunday work.

Two years ago now we were down on Turtle Lake.  Many miles from that spot now.  Was that a beautiful place as the sun was arriving coming through the birch trees with their golden colored leaves after being hit by frost.  Can you remember old Paddy & Blake wonder whatever became of Blake anyway? Sure was a good old scout.  Liquor was his only and worst enemy.  I hear U.S. is going dry that will sure be a god send to many a man and his family.

How do you like your new place?  Hope well.

Its getting late but I don’t write so very often so nice endeavor to make this a long letter.  Now about writing don’t stop writing because my letters are not forthcoming so fast as you think they should because there are many reasons for my not writing now.

Often times the conditions are such that one can’t possibly do so.  Been some 3 weeks since I have written home.  But got mother and Dell both out a letter this evening.

Guess it will be morning before I finish writing as I have planned upon doing a great deal of writing today or night rather.

So the Jack are coming to the harvest fields of N.D. are they.  Sure must seem awfully funny to all those old boys ha ha.  Wonder if you will see any of our old friends from the (International) Falls.  I have been very fortunate and not contracted any cold this fall and will endeavor to keep away from it if possible.  Guess it will be hard when rainy season sets in.

But we are very well clothed and taken care of best of any army in the field so chances are in our favor. We receive a New York paper published in Paris that gives us some news but of course we don’t always receive it.  Perhaps once a week if we are lucky.  But if you could see the war game as its carried on over here you would not wonder why mail moves slow  So many men.

Very pleased to learn you have a good place and that you are well treated.  Pleasant people to work for help a great deal every one knows.  I hope to be able to visit some of the large cities in France before I return to good ole U.S.A.  But of course it’s a question.

I am becoming cold in this billet of mine and believe I will close for the evening.  You remember how cold it used to get in the shacks up north.  About same here.

Received letter from a cousin of mine in service  back home he is a cook.  I haven’t seen him since he was a small guy.

I will bid you good night & good bye for this time.

Bbl of love and good wishes to you and R (Raymond).