The Butte of Mont Sec is about 13 kilometers west of Flirey.  It’s the highest hill in the St. Mihiel area.  Today there is a beautiful commemorative monument at the top. 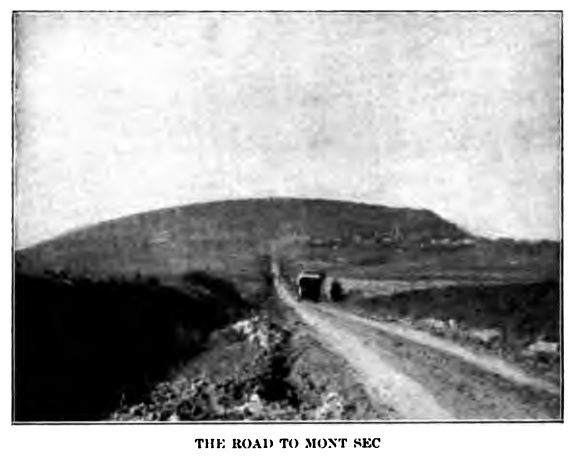 One hundred years ago today, on October 9, 1918, Companies “E” and “F” were working on roads to the west of Flirey near Mont Sec.  Thank God Jay and the Company A cooks were back in Flirey on this day.

At 4.15 o’clock the afternoon of the 9th, while men and officers were occupied with the duties on the road, the monotony of work was interrupted by the report of a terrific explosion.  It seemed to come from the direction of “F” Company’s kitchen.  Hastening to the scene the members of the companies were greeted by a sickening and gruesome sight.  The kitchen, including provisions, had been blown to atoms; and strewn upon the ground lay the victims of the accident besmeared with flour, grease, and blood, silently bearing their pain and dazed by the awfulness of the moment.  Men of both companies and of the medical detachment rushed to their aid.  Wounds were carefully bandaged and everything was done to alleviate the suffering.

Private First Class (Everett) Tefft made the supreme sacrifice and was laid away on Mont Sec with military honors….(Cook Louis) Pieraccini died of his wounds.”

The accident was attributed to the explosion of a Bangalore torpedo, prepared by the Germans and left behind in their retreat.  It was detonated by means of a friction fuse, working on the same principle as the hand grenade.  Through ignorance, the fuse was set into action and the torpedo exploded.  The circumstances were purely accidental  and cannot be attributed to carelessness on the part of any one man.  It was only one of those many painful accidents from which our men learned the value of leaving dangerous-looking objects alone. 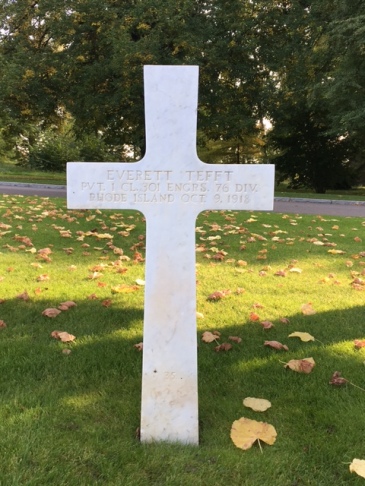 Cook Louis Pieraccini was laid to rest in the St. Mihiel American Cemetery.

I visited their graves in 2017 and again a few weeks ago.  Both men were single and had no children.  Between 1930 and 1933, thousands of surviving mothers and widows were invited by the US government to visit their sons’ and husbands’ graves in France.  These visits were referred to as “Gold Star Pilgrimages”.   I’ve searched the records of those Pilgrimages and found no record that the mothers of Tefft or Pieraccini made the trip.

I’ve wondered if anyone who knew them had ever visited them before me.  That’s a question that comes to my mind every time I visit the graves of the men of the 301st Engineers buried in France.